A Kansas farm boy goes home to understand his role in groundwater depletion. He finds the culture and politics as confused and confounding as the geology of the Ogallala Aquifer itself.

Simple metrics of the Ogallala Aquifer astound. This somewhat interconnected body of water underlying the high plains accounts for one-third of all irrigation in the United States. It supports one-sixth of the world’s annual grain production.

Water in the underground sands, silts, and gravels stretching from South Dakota to Texas – including parts of eastern Colorado — was deposited over millions of years. Now, in not even a flutter of geologic time, barely more than the lives of the oldest baby boomers, this most precious resource has been mined nearly to extinction across broad swaths of the High Plains.

This is particularly true along its edges, such as in New Mexico, but even in some central portions, including southwestern Kansas. Wells can be drilled deeper, but that can only hasten the reckoning that many seem to want to deny. The seeming plentitude of today manifested in the many circles of hay and alfalfa irrigated by center-pivot sprinklers simply cannot continue indefinitely. Evidence of precipitous decline abounds. 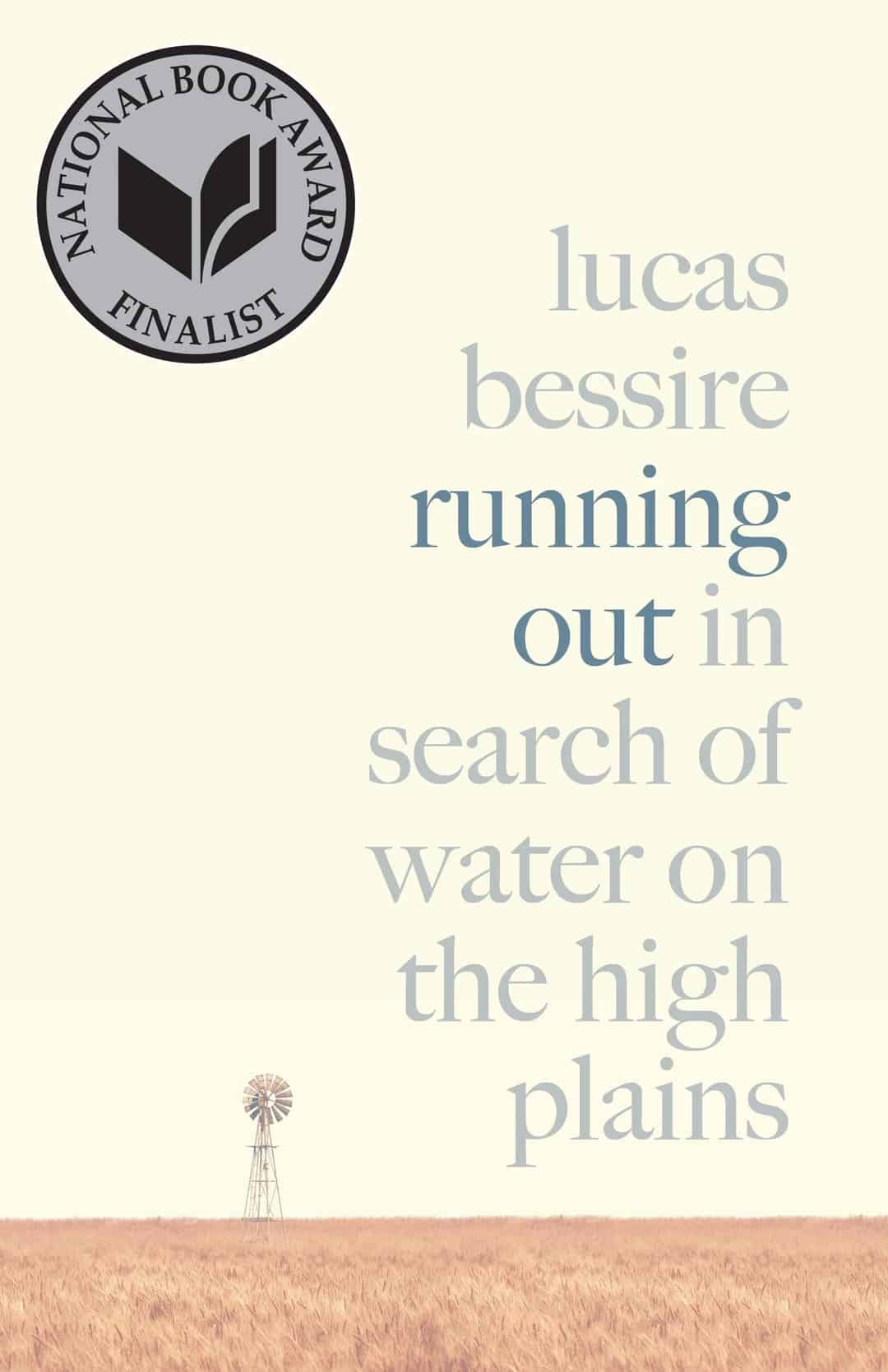 Lucas Bessire, an anthropologist and native son of southwestern Kansas, explores this depletion in his masterful “Running Out: In Search of Water on the High Plains.” For good reason it was a finalist for the 2021 National Book Award.

Depletion of the Ogallala Aquifer has produced several books plus other journalism. Bessire has a more narrow but interesting approach. Instead of trying to tell this across the eight-state region, he focuses on southwestern Kansas through the lens of four generations of his family: a great grandfather who was a pioneer in this new groundwater mining of the mid-20th century, his grandmother who was at its ragged hard-to-reconcile edges, and a father from whom Bessire was at least semi-estranged but who becomes, in this book, a partner in detective work.

Not least Bessire’s book is of his own journey to the place of his upbringing to examine it with new eyes, as if a stranger, and in that way probe his own complicity.

Always in these pages Bessire looks over his shoulder, both to his family but also of the region’s history, rife with depletions of earlier times. In this, he seeks to make sense of the present so as to take responsibility for the future. In this struggle to define what it will take to live in a more sustainable way in the world, he takes guidance from his long-departed grandmother. She had in her life struggled to end her dependency on alcohol, drugs, and tobacco. The first step, she wrote in notes now a half-century old, “is to admit that I am not responsible for the past, but that I am accountable to tomorrow.”

That observation borne of his grandmother’s pain is one for all of those of Ogallala Country – and, although Bessire does not dwell on this, all of humanity.

Working through the many big ideas in “Running Out” never taxes. Every page has sentences to be savored and, in my case, paragraphs to be highlighted in yellow, for later savoring and deepened understandings.

“Running Out” has a dreamy, confusing theme, one clearly intended. In his quest to understand, Bessire finds mazes of depletion, layers of deception, a dried river, and a waterless spring that was part of his family’s operation, an area where hydrologists now estimate three-quarters of the water has been removed. There are clouded memories, a strange mist, a numbing vapor, and a ghostly presence.

Always, there is ghost of his grandmother who in her life was subjected by her handlers to electroshock therapy in an attempt to create amnesia. She spent the rest of her life, says Bessire, trying to recapture the water of her youth that had disappeared.

There are also blurred boundaries, conundrums, and contradictions, plus the confounding logic used to justify the depletion. Meetings of the groundwater management districts that he and his father attend showcase this distorted logic.

These districts, under Kansas Law, have authority over the depletion. At one meeting, he attends in expectation of debate about the future of the aquifer, he instead finds blandness, words, and a mood “strangely flattened and trivial, as if veiled behind some gauzy medium that muffled words and distorted time.” The gatherings of aging white men he describes as dishonesty disguised by dullness.

At one of these meetings, “John,” whom he describes as the official playing the part of emcee, belabors the distinction between “impairment,” a word he discourages, and his strong preference, “drawdown allowances.” The talk then extends to the solution, imported water.

Another meeting produces more fuzzy logic: Imposing limits on pumping does not provide an answer because it would force the transition of irrigated land to less valuable non-irrigated farm land and hence a yanking of the economic platform for the region. As such, depletive irrigation must continue. Again, the answer to the inevitable lies in importing water from elsewhere, presumably with the federal government footing the bill for a canal (and pumps) from the Mississippi River.

That solution is only slightly less improbable than the giant machines that some envision for sucking carbon dioxide out of the atmosphere.

The federal government played a role in creating this mess through its insurance programs for crops that favor irrigation, says Bessire. Even more clearly he blames corporate agriculture, the majority owners of the land in this county of southwestern Kansas and the mostly hidden influence that makes the groundwater districts forums for doublespeak. A few farmers use disproportionate amounts of water, and those farmers advocating for restraint in pumping have little voice. The exploitation, he says, is anti-democratic.

Bessire’s four chapters – Lines, Bones, Dust, Clouds – are carefully crafted, at least partly a result of a year’s fellowship at Harvard University. The prose constantly delights. Driving in the night with his father, he observes “the spinning pivots, under the turning stars.” On another trip through “towns with courthouse squares and false fronts” he sees “emptied houses (that are) falling down in arrested motion.”

Exploitation, extinction, and extermination are subthemes to his focus on depletion. He tells of the killing of the once vast bison herds that virtually disappeared in a burst of gluttony in 1872-74. The buffalo bones at the railroad siding in Granada, in southeastern Colorado, were 12 feet high, 12 feet wide, and a half-mile long. Most of the buffalo hunters made no money, he observed – a metaphor, if you will, for the farmers depleting the aquifer today.

The buffalo extermination was also a somewhat conscious decision, a way to force Native American tribes off the land so it could be farmed and ranched. Part of this was the Sand Creek Massacre, whose site in Colorado, just across the border from Kansas, he visited in the company of his grandmother in the 1990s. He wonders at his own lack of understanding of this history that was prelude to his existence there, a child of the plains. “We lived among the rubble of genocide and dispossession in a landscape that had been transformed,” he says.

No mention is made of critical race theory, but this conclusion does invite comparisons.

The book has no spare baggage. It has disciplined focus reflected in its relative brevity that belies enormous research. There’s no fat here. The bibliography cites more than 400 books and other sources. His telling of the Sand Creek Massacre, something I have ready deeply about, illustrates this depth.

One might have wished for just a bit more in two areas. A groundwater district in northwestern Kansas in 2017 voluntarily adopted restrictions on the pace of decline. Bessire explains this but does not identify what was different there, why corporate interests did not prevail.

The second element is about the end result of the water pumping. Most crops grown with Ogallala drafting feed livestock. Bessire addresses this – really, it’s at the heart of his book:

“The scale of industrial farming is staggering,” he says. “Southwest Kansas is home to some of the nation’s largest corporate feeders, beef- and poultry-packing plants, slaughterhouses, dairies, milk-drying plants, and hog farms. Multinational meat-packing companies operate slaughterhouses that process several thousand cattle each day. All are billion-dollar businesses. They drive farmers’ choices to produce corn, silage, sorghum, or alfalfa. Their profits depend on aquifer deletion. In other words, there is a multibillion-dollar corporate interest to prevent regulation and to pump the water until it’s gone.”

I might have liked to have seen this livestock story developed more fully, another full chapter, actually. Maybe it’s another book, a sequel.

Trucks deliver the corn harvest at a feedlot near Imperial, Neb. Photo/Allen Best

The cost of eating meat is heavily, heavily subsidized and cannot continue at its current pace. We are borrowing against the opportunities of future generations with no clear way to pay that debt. I am, by the way, a meat-eater.

This conclusion was derived in part from my own research into the Ogallala in the context of eastern Colorado. My work has been marginal. My commissioned assignments have been to extol the efforts made to innovate. I was not given a blank check to investigate, nor did I take a second-mortgage on the house while I asked the hard questions that Bessire did (he camped out in the barn of his father).

But I sensed what Bessire explains in his opening, that “depletion of the High Plains aquifer is a defining drama of our times. Within it, planetary crises of ecologies, democracy, and interpretation are condensed. It demands a response.”

To that I will note one of my recent interviews with a farmer who is also water district official. He said Ogallala farmers are ultimately selling water. As such, he said, they should be mining the groundwater for high-value crops.

Truth searching rarely comes easily. Geology can be very complex, too. In his opening passage, Bessire tells us about the difficulty of working through the politics and cultures of depletion.

“The sediments are vertically stacked in layers. They are patchy and unevenly spread. Repetitive themes run between them: memory and amnesia, homelands and exile, holding on and letting go. At times, the layers flow together and connect. At others, they are interrupted and blocked.”

That he emerged with a book worthy of being considered for the nation’s top book-writing award testifies to his success in navigating these physical and other subterranean passages.