Manipulating from the margins: climate change and the Marshall Fire 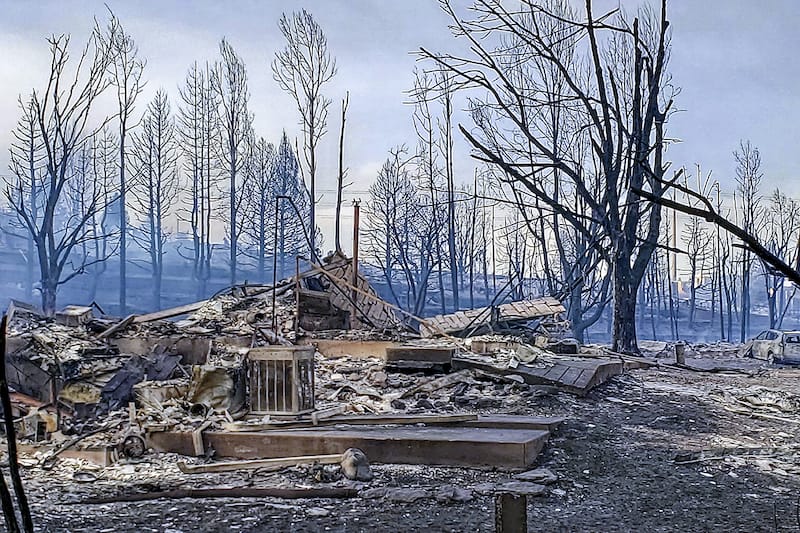 So this is what climate change looks like: operating on the margins, yet able to dramatically alter the story on center stage.

Warming temperatures played a monster role in creating the conditions that enabled the fire that burned nearly 1,000 houses as well as other buildings in Boulder County on Dec. 30.

“We are just numb. It happened so quickly,” Lafayette resident Peggy Williams reported in a Facebook post after being forced to flee. “We never thought our little towns would experience something like this.”

To understand what happened and why, it’s useful to examine the discrete elements. Some are entirely natural and nothing new. Taken together, though, they represent a new dynamic, unprecedented in Colorado.

“Certainly, climate change is never the only part of the story when it comes to wildfires. It’s part of the story but there’s always more to the story,” said Russ Schumacher, the Colorado state climatologist. “That being said, what we see in these fires and have seen in the last couple of years in Colorado, the changing climate is kind of making us expand our imaginations of what types of destructive wildfires are possible.”

A scattergram assembled by Schumacher showing weather and precipitation records from three Front Range locations tells the story of hot and dry over past decades. The Fort Collins record goes back longer, but records kept at Denver’s Central Park – the site of Denver’s airport prior to DIA — are more proximate to Boulder.

The year 2021, for the period between June 1 and Dec. 29, stands alone in its intense combination of warm and dry, even compared to other seven-month periods. Look at the warm and dry quadrant closely and you will see a pattern: disproportionate representation of 21st century years.

Because of the warm temperatures and drought, vegetation became bone dry by year’s end. And that resulted in what one meteorologist suspects was near-record combustibility of the grasses in the open spaces.

High winds were another crucial ingredient. They rapidly pushed the flames eastward from origins of the fire near Marshall, on the outskirts of Boulder, through Superior and into Louisville while threatening Lafayette, Westminster, and Broomfield.

What’s new in all this?

Wind? Absolutely not. Boulder, Golden, and Denver were still new mining supply camps in the 1860s, when the newspapers of Colorado reported the “savage violence” of winds that tore off roofs and stopped trains. Papers issued by researchers from the National Center for Atmospheric Research and the National Oceanic and Atmospheric Administration in the 1970s and 1980s reported winds in excess of 100 mph, including one gust of 137 mph at the NCAR building in January 1982.

The winds of Dec. 30 were notably strong but not without precedent. They shattered the glass in cars and other vehicles, but wind storms in the past have flattened buildings in Boulder, Golden, and other towns even in recent years.

No particular study of the winds seems to have been conducted since the 1980s, but the perception is that they have actually become less frequent in recent decades, according to Schumacher.

One final ingredient, what meteorologist and science writer Bob Henson calls the “other elephant in the room,” is housing and other buildings adjoining open spaces in Superior and Louisville. Without it, this would have been a prairie fire.

Conditions for the fire began setting up in spring. Abundant May rains created a landscape lush and green. Then in June, it stopped raining across most of the Front Range and temperatures spiked.

In a tweet, Henson pointed to records for Sept. 1 through Dec. 30 for Denver.

“The warmer it gets, the harsher these droughts will be on the landscape,” Henson, whose books include “The Thinking Person’s Guide to Climate Change,” wrote in the tweet.

The climate writing was on the wall

Climate scientists in recent years have stressed how rising temperatures can create drought where none would otherwise exist. These are called hot droughts, and California has made them infamous.

That expression has also been used in the Colorado River Basin. There, increased evaporation and transpiration caused by rising temperatures has robbed average or near-average snowpacks, producing runoff into Lake Powell of 25% to 30% of average.

In Boulder County, precipitation was nowhere near normal. In its New Year’s Eve story, “How extreme climate conditions fueled unprecedented Colorado fire,” The Washington Post reported that Boulder averages over 30 inches of snow between September and December; this year it got 1.46 inches. 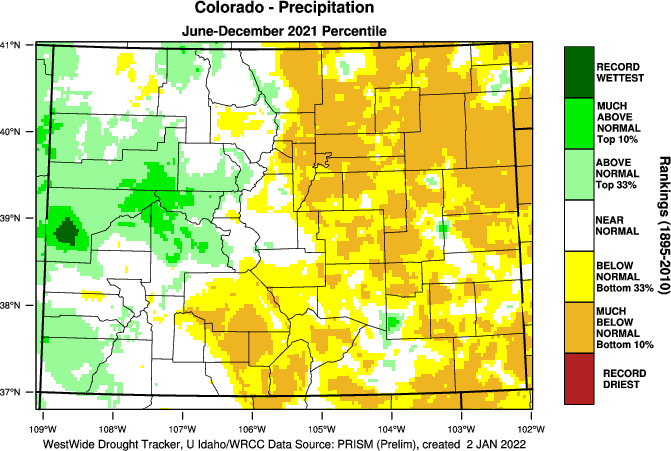 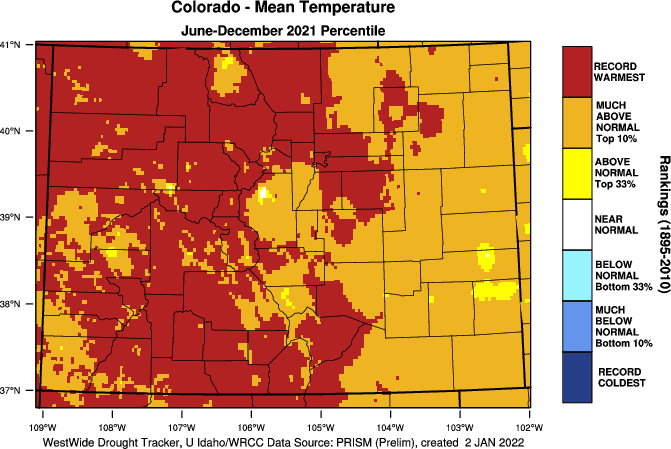 This converted the green vegetation of May into the sort of tinder useful to getting the logs burning in the fireplace. The Washington Post story by staff writer and meteorologist Jason Samenow, assistant Colorado state climatologist Becky Bolinger, and meteorology student Jacob Feuerstein pointed to two indexes that document this flammability.

One, the Evaporative Demand Drought Index, or EDDI was at a record high in eastern Colorado during December. The index provides a snapshot of how “thirsty” the atmosphere is compared to normal that time of year.

“It can be a good wildfire risk predictor as it takes into account temperatures, sunlight and wind, in addition to humidity,” the authors wrote.

Another indicator, the Energy Release Component, was also dangerously high, reflecting the contribution of all live and dead fuels to potential fire intensity.

Boulder County had instituted fire restrictions on Nov. 30, prohibiting open fires, including charcoal barbecues and grills. The release said the restrictions were a response to the “increasing fire danger, lack of moisture, and the forecast for above seasonal temperatures without precipitation.” As of Dec. 30, eastern Boulder County was in a swath described by the Colorado Drought Monitor as “extreme,” the second driest category.

Then came the spark or fire – from a source or sources still undetermined as of Sunday evening — and the 6,200-acre conflagration.

Henson observes that the vast majority of the homes were built in the 1980s or later. Had this firestorm occurred 50 years ago, it might well have been largely a prairie fire. With the development, though, it became a different, more destructive fire.

Massive fires have not been uncommon on the Great Plains. In March 2012, a fire near Yuma burned 24,000 acres. Other fires in recent years have swept across hundreds of thousands of acres in other Great Plains states.

“As white cells are to man, so fire is to prairie,” wrote William Least Heat-Moon in “PrairyErth,” his paean to Chase County, Kansas. In his assessment of the tallgrass prairie, however, he did not speak to the seasonality of prairie fires.

The latest major fire on the Great Plains occurred in mid-December. A fire driven by gusts of up to 100 mph resulted in deaths of two men and damages across 163,000 acres near the town of Paradise in north-central Kansas.  As with the Boulder County fires, abnormally dry conditions were blamed along with the winds.

“It was definitely a perfect storm,” Shawna Hartman, a spokeswoman for the Kansas Forest Service, told The Associated Press. “These fires ran for 20-plus miles in an afternoon. It’s very, very reminiscent of what you would see in California.”

In the shortgrass prairie of Boulder County, Henson described a similar confluence of “several things going wrong at the same time, including the wind storm, the dryness, the warmth drying out the landscape further.”

The suburban nature of this fire also deserves attention. This wasn’t the foothills in what is commonly called the wildland-urban interface. It was the place of winding streets, many million-dollar homes and an economy strongly engaged in northern Colorado’s booming high-tech economy.

Residents forced to flee were still in shock two and three days later, trying to sort out the circumstances that had at least one (and likely many others) shopping for clean underwear and other necessities at Target in nearby towns, still unable to return home.

That shopper, after a night deprived of sleep and still unsure of whether her rented home was standing — it was, but a house four doors away had become rubble — shared a friend’s report from afar of having a new understanding of what it’s like to be a refugee.

The Wildland-Urban Interface is the Boulder County suburbs

Daniel Swain, a climate scientist at the University of California Los Angeles and a well-known blogger, pointed out in a tweet that the Boulder County fires demonstrate “just how far into the suburbs the … interface actually extends given sufficiently extreme drought and wind conditions.”

In a tweet, the University of Montana’s Phil Higuera, a professor of fire ecology, also suggested the fires will “help dispel the misconception that the wildland-urban interface (#WUI) is ‘just’ a bunch of vacation homes in dense forest.”

In 2012, the Waldo Canyon Fire on the edge of Colorado Springs destroyed 346 homes and killed 2 people. Photo/Allen Best

During the last decade, fires have made it into the suburbs and exurbs. In 2012, the Waldo Canyon Fire destroyed 346 homes and killed 2 people on the northwestern outskirts of Colorado Springs. The next year, the Black Forest Fire destroyed 511 homes north in a forested area north of Colorado Springs in what was – until the Boulder County fires – the most destructive of human property in Colorado history.

Different from those June fires in and near Colorado Springs, the Boulder County fires occurred in late December. This is a new game, at least in Front Range fires. It’s also part of a trend: an expansion of wildfire season. Like tornados in Southern states and the Midwest, the calendar for wildfires is less useful.

Consider the East Troublesome Fire. In the 20th century, mid-October brought hunting season and snow. In 2020, it produced a new fire even as other fires, including the Cameron Peak Fire west of Fort Collins, continued to grow. Then came a wind storm and, on Oct. 22-23, East Troublesome raced past Grand Lake and vaulted across the treeless Continental Divide, forcing the evacuation of Estes Park.

Now comes the state’s biggest fire in history — on the cusp of New Year’s Eve.

The fire will force us to “expand our imaginations,” said Schumacher. “Thinking about the most destructive fire ever happening in late December is not the sort of thing that we were probably planning on. Given what we have seen in the last couple of years, we as a collective Colorado community need to do some rethinking of what is possible, what we need to prepare for.”

Top photo, the rubble of a home in Louisville, taken by Robert Castellino Photography. This story benefitted from editing by the crew at Boulder Reporting Lab. Scattergrams and posts courtesy of Russ Schumacher.

There Will Be Fire: Colorado arrives at the dawn of the era of megafires tells about the debate in Vail about the risk of wildfire in light of the East Troublesome and other massive wildfires.

Is Fire Really Essential in Prairies? probes the difference between prairie, as in the ecosystem, or prairie, as in an individual patch of grassland.